Home About Us Patients

Red cells, or erythrocytes, carry oxygen from the lungs to body’s tissue and take carbon dioxide back to lungs to be exhaled. 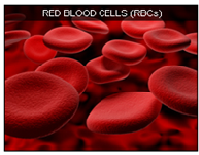 Red Blood Cells (RBCs) are perhaps the most recognizable component of whole blood. RBCs contain hemoglobin, a complex protein containing iron that carries oxygen through the body. The percentage of blood volume composed of red blood cells is called the “hematocrit.” There are about one billion red blood cells in two to three drops of blood, and for every 600 red blood cells, there are about 40 platelets and one white cell.

Manufactured in the bone marrow, RBCs are continuously produced and broken down. They live for about 120 days in the circulatory system. Red blood cells are prepared from whole blood by removing plasma, or the liquid portion of the blood, and they are used to treat anemia while minimizing an increase in blood volume. Improvements in cell preservation solutions over decades have increased the shelf-life of red blood cells from 21 to 42 days.

RBCs may be treated and frozen for an extended storage, of 10 years or more. Patients who benefit most from transfusion of red blood cells include those with chronic anemia resulting from kidney failure or gastrointestinal bleeding, and those with acute blood loss resulting from trauma, pregnancy, major operations etc.

Platelets, or thrombocytes, are small, colorless cell fragments in the blood whose main function is to interact with clotting proteins to stop or prevent bleeding. 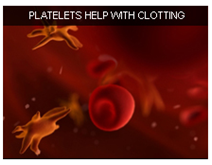 Platelets are small blood components that help the clotting process by sticking to the lining of blood vessels. Platelets are made in the bone marrow and survive in the circulatory system.

Platelets are prepared in blood bank / blood centre by using a centrifuge to separate the platelet-rich plasma from the donated unit of whole blood.

Platelets may also be obtained from a donor by a process known as apheresis, or plateletpheresis. In this process, blood is drawn from the donor into an apheresis instrument which separates the blood into its components, retains some of the platelets, and returns the remainder of the blood to the donor.

Plasma is a fluid, composed of about 92% water, 7% vital proteins such as albumin, gamma globulin, anti- hemophilic factor, and other clotting factors, and 1% mineral salts, sugars, fats, hormones and vitamins. 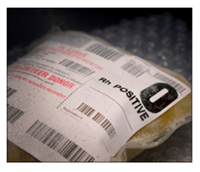 Plasma is the liquid portion of blood – a protein-salt solution in which red and white blood cells and platelets are suspended. Plasma, which is 92 percent water, constitutes 55 percent of blood volume. Plasma contains albumin (the chief protein constituent), fibrinogen (responsible, in part, for the clotting of blood) and globulins (including antibodies). Plasma serves a variety of functions, from maintaining a satisfactory blood pressure and volume to supplying critical proteins for blood clotting and immunity. It also serves as the medium for exchange of vital minerals such as sodium and potassium and helps to maintain a proper pH (acid-base) balance in the body, which is critical to cell function. Plasma is obtained by separating the liquid portion of blood from the cells.

Plasma is frozen quickly after donation (up to 24 hours) to preserve clotting factors, stored up to one year, and thawed shortly before use. It is commonly transfused to trauma patients and patients with severe liver disease or multiple clotting factor deficiencies.

Cryoprecipitated Antihemophilic Factor (Cryo) is a portion of plasma rich in clotting factors, including Factor VIII and fibrinogen. It is prepared by freezing and then slowly thawing the frozen plasma. 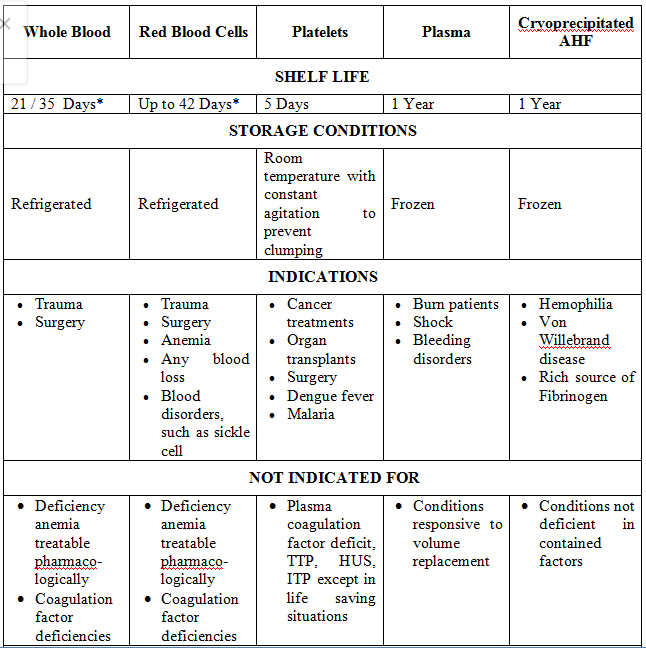 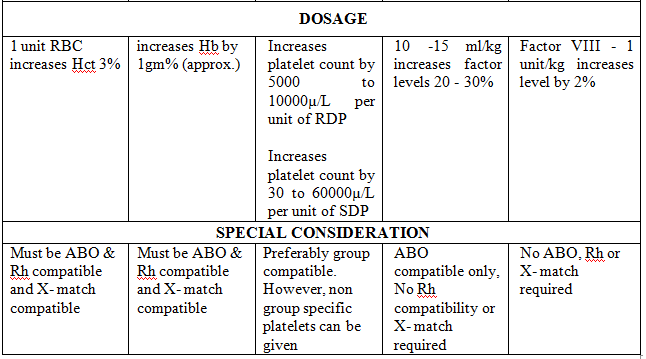 * Shelf life of whole blood and red cells varies based on the type anticoagulant used.

Blood groups are the results of antigens (large protein molecules) which are present on red blood cells. Primarily there are two such antigens A & B which decide our ABO blood group.